Last week’s post was ‘inspired’ by a recent encounter which brought up the issue of how best to react when talking to someone about their autism or other invisible condition. I am not telling people what they can or cannot say (although my personal preference is to shut my mouth if I have nothing better to add). The point I’m trying to make is whether people intend it or not, what they say carry consequences and it is not so much the language or choice of vocabulary but their attitude and intention, including how the listener perceives their attitude and intention. Added to the confusion, people on the spectrum may have difficulty interpreting the situation. The encounter brought up the exact issues I mentioned in one of my earlier post, “Dear Lucy, I have autism” in which I mentioned “I can have someone telling me “I don’t look autistic” and I am perfectly fine with that response if I felt that person has listened and acknowledged my problems.” (bold my emphasis)

This post is a continuation of last week’s post. In less than five minutes of our encounter, I was told, “You don’t look like the other autistics I’ve met. You must be very high functioning.” I was not sure if it was meant to be a compliment or sarcasm but that automatically triggered my self-defensive mode. When I tried to illustrate some of my traits related to autism, the person remarked “I have the same problem too” and all I could come up with was a pathetic, “oh really?” (Pressing the self-defensive button once more.) When I mentioned some of the challenges I face, I was told “That is so typical of people of your generation” and all I could think of at that moment was to say, “Yeah, I know. It is hard for me to explain.” By that time, I was hitting the self-defensive button non-stop, I was confused because that person was supposed to help but our interaction was sending mixed messages. I didn’t know what was the intention of the person, I had trouble deciphering the meaning behind those remarks. Was the person trying to say “I have the same problem therefore I can empathise with your situation” or “Your problem is typical, it is very normal, you just have to try harder.” In the midst of confusion, it didn’t occur to me that I should clarify with the other person, nor did I think about what I wrote in the post “Dear Lucy.” I just felt I was under attack and couldn’t think of a more appropriate response. I think I hit the panic button at the same time. I panicked because I perceived myself to be in an adversarial situation which required me to be firm but I am not a confrontational nor assertive person by nature and hate to appear rude or accusatory. The irony is that because of my ability to show concern for the feelings of others, that person would have probably taken this as a sign that I am not autistic enough, as based on that person’s previous encounters with other autistic individuals, people with autism tend to be abrasive and easily offend people with their bluntness.

First, I was told I don’t look autistic. Then, I was made to feel that my problem was trivialised. How could I better respond? I half answered my questions in last week’s post: 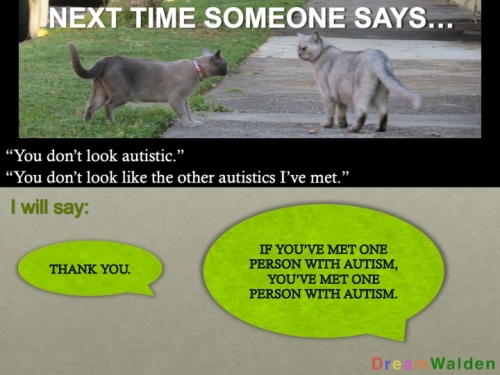 What about the trivialising, dismissing and belittling “That is normal/ Everyone has a problem/ Everyone is a bit autistic”?

What have the Thais and wallabies got to do with it? 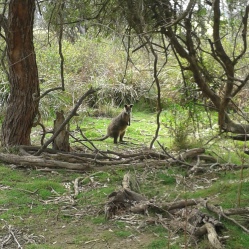 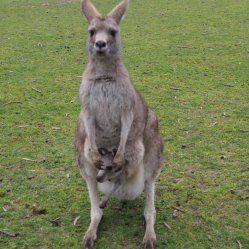 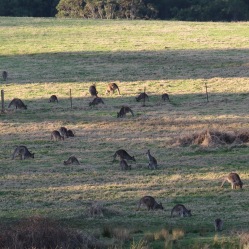 One of the things in Australia that fascinates me is their abundance of wildlife. Each time I came back from a trip, I learn something new about different animal species and find out what their names are. I am very impressed and find it pretty cool that the locals can readily point out an animal (or plant), identify its name and describe its features. There is a whole wide world of knowledge and I know only a minuscule. I can point out that the colourful creatures I saw flying and chirping on the trees are not just birds or parrots, they are rainbow lorikeets; and those pretty pink ones are not just birds or cockatoos, they are galahs. Ravens and crows look the same but apparently, they are different.

I remembered asking, “Wallabies are just smaller kangaroos, aren’t they?” To which, my lovely tour guide replied with a smile, “Same same, but different.” If you have been to Thailand, you probably notice that this is a very common and popular phrase that is used in Thailand (and the South East Asia). I do not know of the origins of the phrase but its usage is versatile. Whenever I hear this phrase, it reminds me of the smiles (or cheekiness) of the Thais when they try to sell you something which you are not after or not the exact one you were looking for. Perhaps, there is much to learn from the Thais in this respect, a phrase I could adopt and put into good use for future encounters. 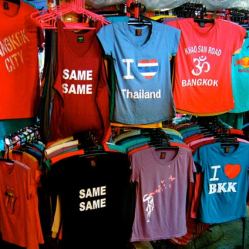 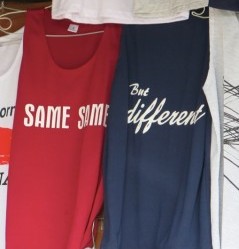 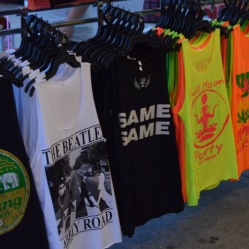 Photo credit: Scroll over or click on the link to refer to original source.

Do you know that the potoroos belong to the same group as kangaroos even though they look more like rats? And that rats may be mistaken for possums which are marsupials?

Same same (like rats) but different? Can you identify these animals? 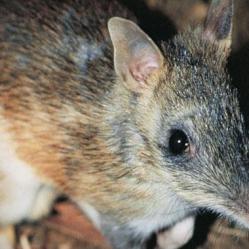 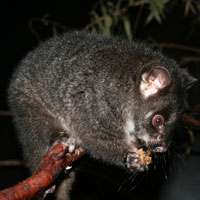 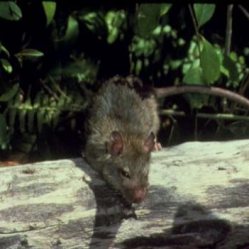 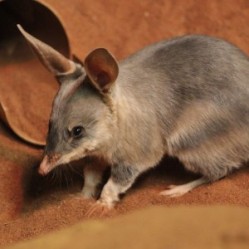 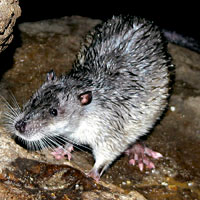 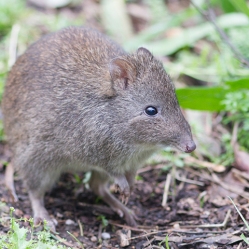 Photo credit: Scroll over or click on the link to refer to original source.

So what am I trying to say?

With my limited vocabulary and knowledge, I can merely use “rat-like” creatures to describe the above animals. I am not an expert in this field but I don’t need to become one to acknowledge that my description is not entirely accurate and that they are different. If I am interested and care enough about my environment and habitat, I will read and observe to understand their behaviour better instead of jumping to immediate conclusions that they are just the same like rats. 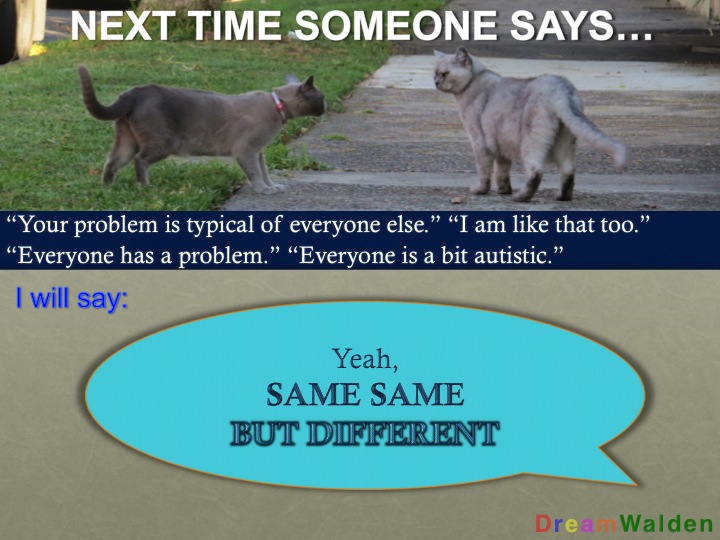 What do you mean? How so different?

Well, I am just a human being like everyone else. I have good days, bad days, strengths and weaknesses. People on the spectrum have feelings too just like everyone else; I get upset when my efforts are not recognised; I get annoyed when it is too noisy; I find it stressful to commute to work etc. Many people will feel the same way too, my problem is typical, same same.

Humans are born with different genetic makeup, different skin colour, different ethnicity, different culture, different environment etc. Autism spectrum is a neurodevelopmental condition that affects how a person perceives the world and interact with others. In the case of Asperger and in particular, females with Asperger, (where for the ease of explanation, some would describe it as mild autism or high functioning autism) the characteristics may not be as unique or extreme as classic autism. However, difference still exists and lies in the strength and dominance of that characteristic. The difference may not be visible on the appearance but it is not a reason to disregard the difference.

“There is nothing about (the characteristics of) Asperger that is completely unique. It is the strength of it, the dominance in that person’s life and it is the pattern that is significant.” Professor Tony Attwood

If you insist to treat the two as the same and lump their problems together, if you insist to call wallabies, kangaroos, you are looking at the symptoms, not the root cause. (More on this in a later post…)

Photo credits: Unless indicated otherwise, the photos belong to the author.

Sometimes I have an influx of ideas but I don’t always know how to articulate and express my train of thoughts. It is frustrating when I can’t get the right words out of my mouth. My vocabulary is limited and I take a longer time to process information and respond, which is why I am more comfortable with tasks that emphasise quality over speed. I also have problems prioritising and formulating these ideas into plans, that is poor executive functioning skills, which seems to be another autism characteristic. I currently have a number of ideas including posts I want to write about that are stuck in my brain. I can write but I don’t have the flair for writing because it takes me a lot of time and effort to be organised and eloquent (and I don’t get paid for the time I spent on my blog). You can ask me a question now and I will still be replaying our conversation a week after, thinking how I could have responded better. This is why I only schedule, at the minimum, a post per week and I apologise for the quality of my posts, which serve no practical purpose other than an avenue for me to vent my feelings and frustration. I started this blog as a channel to communicate my needs, demonstrate my strengths and improve my chances of moving to Australia but somehow I feel I am exposing my weakness instead and digging my own grave.

Anyway, I am completely off the topic originally intended for this post but since I talked about my executive function and slower processing skills, it ties in with another topic I wanted to write about, reacting and responding to another person’s questions about autism and my diagnosis, and how it is often the case of sadder but wiser. Coincidentally, the invisibility of autism, what people expect autism to look like and how everyone is a bit autistic, is a recurring topic and seems to be gaining attention lately in the autism forums and blogs I follow*, suggesting this is indeed a problem and there is still a long way to go before the needs of autistic people are recognized and before people with autism are accepted as they are.

Even though I am now more knowledgeable about the autism spectrum conditions, I am still not well-prepared enough to respond spontaneously to other’s questions regarding the condition. I had someone said to me recently, “You don’t look like the other autistics I’ve met. Do you have this trait or problem with XYZ [citing a classic autism behaviour]?” Leaving aside the intention behind the question, my mind automatically switches on to self-defensive mode and all I could think of is, “I have to prove that I am the autistic person I said I am. I have to show that I exhibit the requisite autistic traits to demonstrate my claim.” When I reflected on my response after the meeting was over, I came up with a better one and kicked myself for why haven’t I thought of it sooner? I was too earnest to defend myself (and there is a reason for that which can be left to talk about in another occasion), I forgot my Autism 101, the quintessential, oft-cited saying about autism by Stephen Shore, I even have it in the first paragraph of the introduction to my blog! I need to remind myself to keep my cool and keep a list of “how to reply” for different situations although I suspect I will always be caught by the unexpected, sadder but no necessarily wiser. 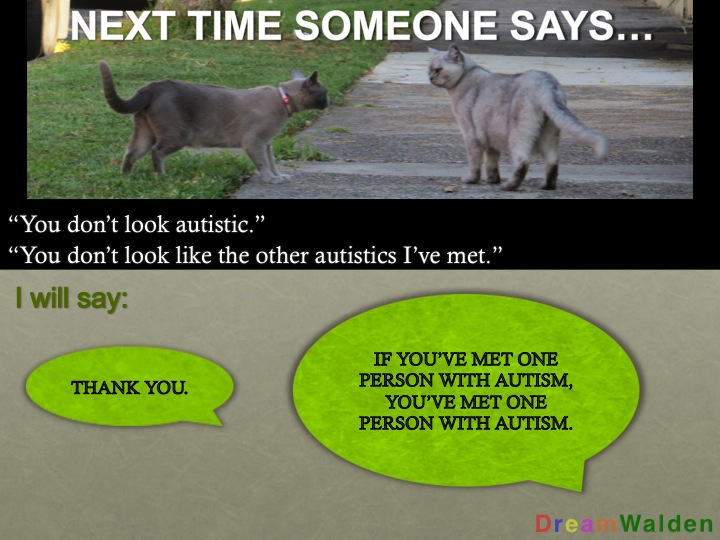 *For a more humorous, sarcastic take towards the question, please read: http://autisticnotweird.com/dont-look-autistic/

Please read my next post on how to react when people say to me “we are all a bit autistic / everyone has a problem”. For this topic, please also read http://unstrangemind.com/is-everyone-a-little-autistic/ and https://mydreamwalden.wordpress.com/2016/03/14/dear-lucy-i-have-autism/