There is never a dull moment on the road less traveled. We have had a couple of rainy days in the past few weeks, some parts of the trail was literally flooded.

On one occasion, I walked past a lady who was sprinkling tiny shreds of paper on the ground. I curiously asked what she was doing. Apparently, there are running groups called hash clubs who meet on a regular basis for a run and drink, and the lady I saw was leaving symbols along the trail that were like clues and breadcrumbs for the group to follow. 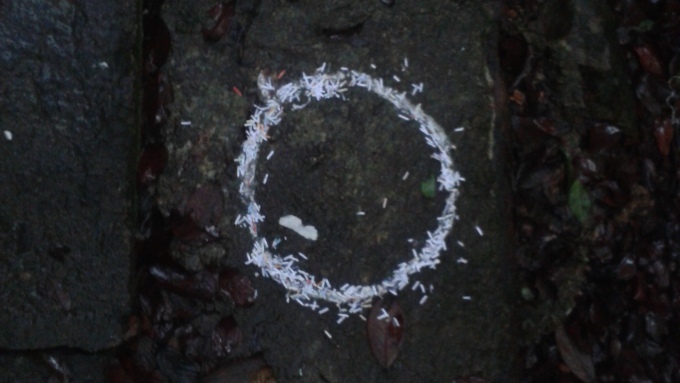 On another occasion, I came across a young boy who was asking for directions (I’m really bad at guessing age, but I would say he was somewhere between 12-15 years old). He wasn’t wearing any thing else other than a pair of white underpants and carrying a racquet. I thought his lack of clothing was a bit odd, that wasn’t something you would come across every day. On further thought, I should have asked if he was alright, even though he didn’t look like he was in distress or anything.

And did I mention wild boars? Not just one, but four! We were so close in proximity, I nearly walked into one of them. However, by the time I took out my phone camera, they were too far out of sight.

Today, the trail wasn’t flooded, there was no breadcrumbs to follow, and I didn’t see any wild boars. There was however, a lady looking for her missing dog, Bella. I’ve seen posters of the missing dog elsewhere along the trail but I never paid close attention to the details. Today, I met Bella’s owner, face-to-face and she handed me a hard copy of the poster. She told me about Bella and where she was reportedly seen by other hikers. I took a glance at the date Bella was last seen, May 19th, thinking that was more than a month ago. And then the owner said she has been missing for more than 2 years. I thought I heard wrongly so I took a closer look at the poster again. It reads May 19th, 2016. The dog has been missing for more than 2 years. What is unbelievable is that the owner is still looking for her beloved dog everyday, hopeful that she is still sound and alive. I nearly wanted to cry. I admire her optimism and courage. We ended up chatting for a while, I told her about my cat and showed her my cat portrait tattoo. I would have been heartbroken to lose my cat. But at the same time, I would have felt defeated and given up long ago. I don’t know what possesses her to carry on. Her strength and determination made me feel small and insignificant. I have so much respect for this incredible lady. She said something about the importance of hope and that’s what keeps her going. Isn’t that what keeps us alive? I hope Bella shows up soon. Maybe I’ll see her one day. I don’t know what Bella’s owner is thinking but I’m sure glad she crossed my path today.